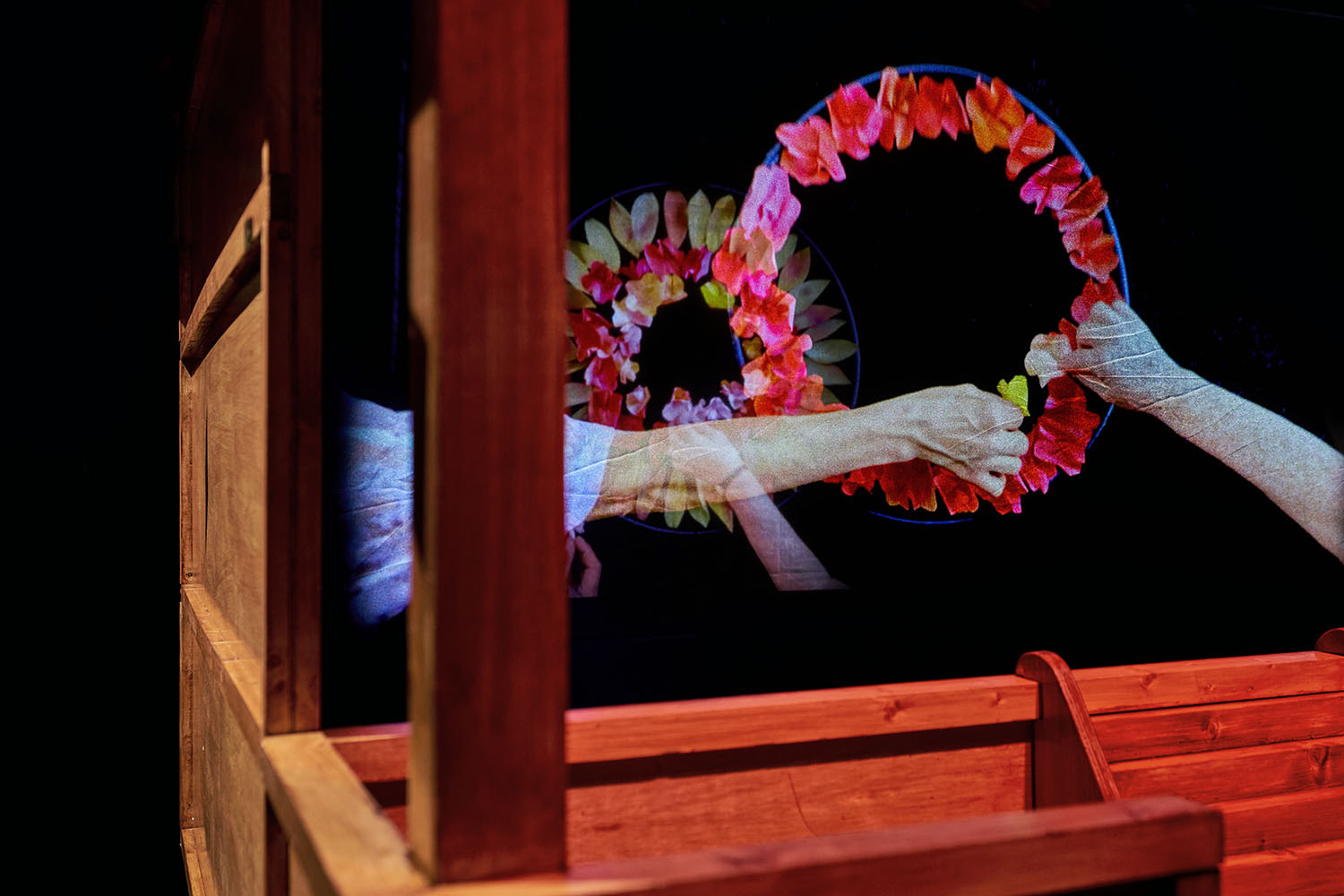 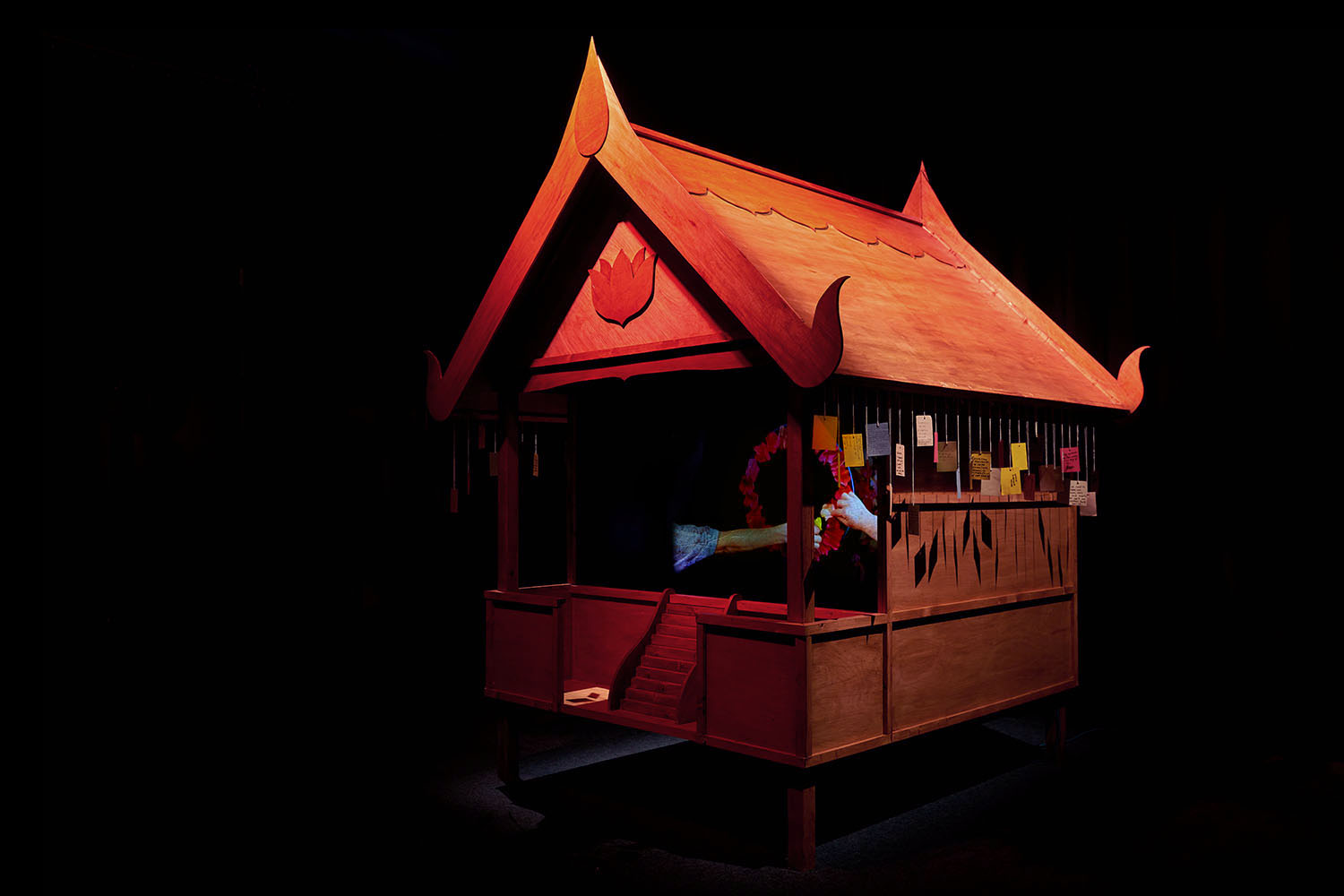 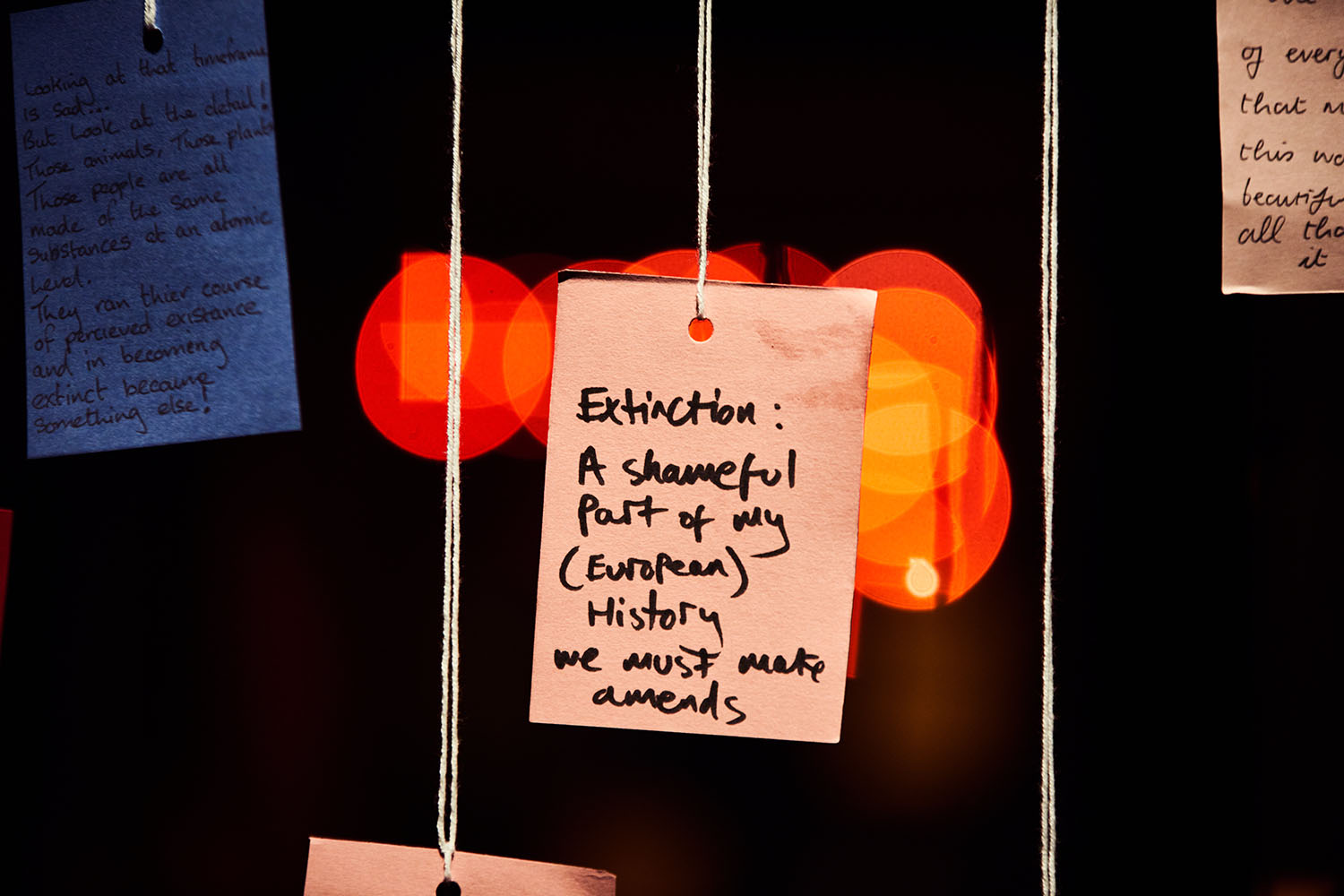 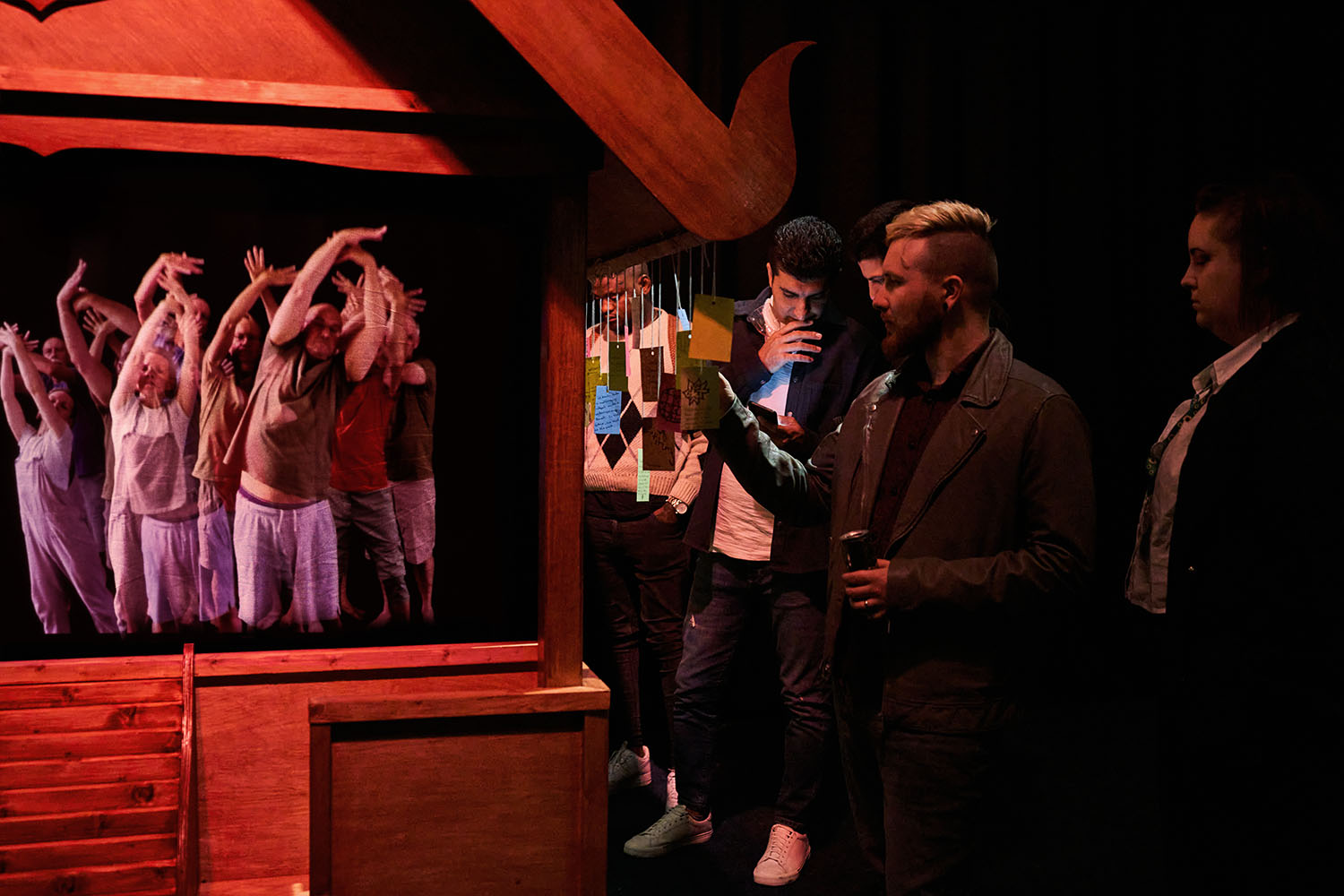 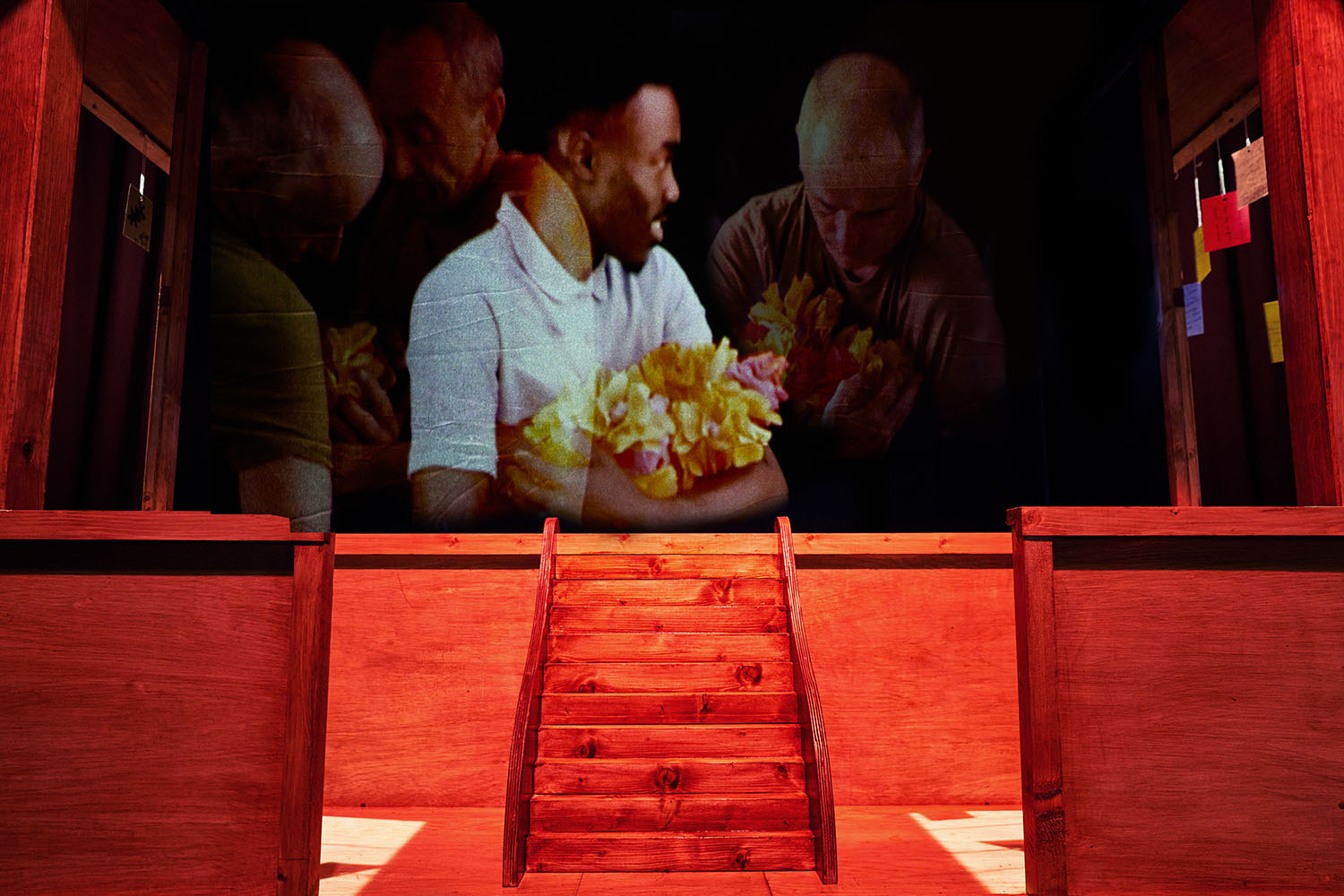 2022
Double holographic projections and soundtrack in Thai-inspired wooden structure.
Commissioned by the School of Philosophy, Religion and History of Science at the University of Leeds and funded by the Arts and Humanity Research Council (AHRC), with extra support from Halton Borough Council.

Biologists tell us that unless radical action is taken we can expect as much as half of the planet’s flora and fauna to become functionally extinct by this century’s end. Termed the Sixth Mass Extinction Event, this is a major biodiversity crisis. The idea of a ‘Sixth Extinction’ often conjures overwhelming fears: of a decimated nature, civilizational collapse, or even the end of the human species itself.

Museums and galleries have a long history of representing extinction through fossil displays, taxidermy specimens and other images of the past. But their natural history approach struggles to account for the unnatural history of the Sixth Extinction. For unlike the earth’s previous mass extinction events, ours is an emphatically social, political and economic affair, driven by ongoing systems of injustice, inequality and violence against human communities and nonhuman beings across the world.

This project explores the responses to such an ethically complex and emotionally consuming phenomenon by people whose voices are rarely, if ever, heard on the topic. How does this knowledge feed into the personal and collective imaginations of the future, and how does that imagination find expression, and seek action? What other creative and emotional responses does it elicit outside of the melancholic and past-oriented representations that have become popular in museum and gallery spaces, and which ultimately seem to disempower public audiences? What other emotions does it evoke, what actions does it inspire? How else do we relate it to our everyday lives?

I speak my language here; usually alone and unheard. My Bantu language is under threat at home across Hereroland and silent or misunderstood elsewhere. My people are declining. When we lose our mother language, we lose a part of ourselves.

Lou Chapelle’s artwork responds to these questions, engaging and drawing upon personal responses to extinction from diverse backgrounds and experiences (including asylum seekers and refugees temporarily housed at Daresbury Park Hotel, Runcorn and those supported by A Better Tomorrow and Trinity Safe Space, Wat Phra Singh UK Buddhist Temple trustees and dancers from Runcorn, Men Dancing from Liverpool, The Studio Writes and The Studio Sings groups in Widnes). People experiencing the piece are also invited to write their responses and attach them to the structure.

We can love a place
and still be dangerous to it.
Beautiful collective actions
Cross- species kinship
Love
Co-existence
Cooperation
And celebration
Consideration
Of what we have.

The double holographic video installation is presented within a structure inspired by a Thai house, a place of shelter and protection. In the garden of these buildings, Spirit houses of a similar style would be constructed to worship and show respect to the spirits of the land, in the hope of attaining blessings upon its residents. The Thai belief of providing shelter for the spirits/ people/ plants/ animals who inhabited the land before us is inspiring when thinking about today’s environmental issues and use of land and resources.

Created in partnership with:

Members of Wat Phra Singh Buddhist temple in Runcorn
Refugees, asylum seekers and volunteers from A Better Tomorrow and the Daresbury hotel in Widnes and Runcorn
Dancers from Men Dancing at MDI in Liverpool
Members of The Studio community choir in Widnes
Members of The studio Writing Group in Widnes
Sense of Sound choir in Liverpool