Proposal for Silk is the Soul

“Silk is still very much the soul of the town.” (Macclesfield, UK)

Silk is the Soul is a concept by artist Laurence Payot developed with Macclesfield Barnaby Festival, using the weaving of silk as a metaphor for global human connections. It explores the traditional processes of sericulture and specific historical locations along the Silk Road, creating as a result a digital 360 video experience.

It is a cross-disciplinary project with many layers, mixing visual art*, performance*, virtual reality***, and sculpture****.

* Laurence will create site-specific installations using silk. These will be designed and made with local groups in each selected location (e.g weaving of silk buttons in Macclesfield, production of silk in Hanzhou, China).
** The creation of each installation will be a happening in a public space and will be recorded in 360 degree from a single person’s point of view with a specifically design 360 camera head gear.
*** The resulting videos will be edited for 360 viewing through VR headsets. People viewing the videos will feel as if they were part of the happening, and transported to key historical locations.
**** The videos will be presented in a structure inspired by weaving looms, using wood and threads to give the work a tangible physicality in real space, something for the viewer to touch and feel.

The project started as a Research and Development project with Macclesfield Barnaby Festival (funded by Arts Council) in January 2017. Macclesfield is a town situated at the end of the Ancient Silk Road. Its silk industry started to boom from mid 17th century with the creation of silk buttons. (https://en.wikipedia.org/wiki/Silk_industry_of_Cheshire#Macclesfield)

Laurence Payot is interested in our collective connections, and how as humans we can only exist and look forward to a positive future if we can find new ways to live together and embrace local diversity.

Looking at the multitude of tiny silk threads placed side by side on looming machines, and how they create such beautiful fabrics and patterns through weaving, she wondered how we could use this as a metaphor for our global society, currently reshaping and re-inventing itself through the multitude of one-to-one connections online and the larger world wide web.

“People believed that the metamorphosis of the silk worm was a metaphor for the process of life.” (Hughou,China)

To explore this further, Laurence undertook a 1-week residency in the place at the origin of the Ancient Road, Hangzhou*, Hughou and the Zhejiang Province of China. Fragments of silk dated to be 4000AC have been discovered there 50 years ago, and silk production is still going strong in this area of China on an industrial level.

What was striking in comparing these two places was their similarities and differences, what people have in common but also what makes them unique and how the reeling, weaving, dying processes of silk are similar but with their own infusion of unique cultural patterns and ways of working, living, believing, being.

The two places at each end of the line on the Silk Road map are deeply connected through centuries of trades and exchanges of material and ideas, but at the same time are still so far apart. Things taking for granted, such as being able to talk to someone, or look at someone’s website or sending an email from UK to China are not straightforward (the artist’s website was blocked in China, emails can take a few days to get through as they go to government security checks first, and language is still a huge barrier). We are not as globally connected as it seems.

Could a project like Silk is the Soul bring some people from these places together through an emotional immersive video – in a way that celebrates diversity and weaves it into new patterns – in a way that embraces and cherish the local and the individual over the global idea of mass participation?

And could this become more ambitious, including other cities along the Silk Road as the project develops?

Laurence aims to undertake residencies in each selected location, to create a happening/installation/video with selected groups and local people. Each happening will feed into the final 360 video presented in the weaving-loom-inspired structure, which will then be toured in each of the city where it has been created.

Images from performance workshop in Macclesfield, giving a flavour of what the public happenings might look like: http://www.laurencepayot.com/2017/05/silk-is-the-soul-workshop-video/

Images from printing workshop in Macclesfield showing how being sings from a single person point of view in the 360 video might look like: http://www.laurencepayot.com/2017/02/print-making-at-the-print-mill/

Blog from trip to China: http://www.laurencepayot.com/2017/10/tales-from-hanzhou-and-heaven-on-earth/

Silk Is The Soul – 360 at Treacle Market 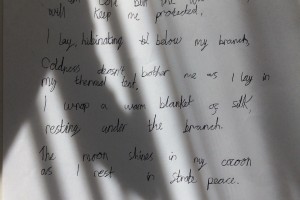 Silk is The Soul – Poetry by Broken Cross Primary Children 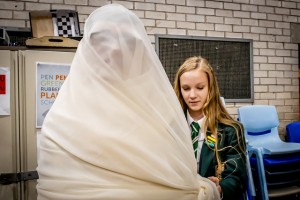 Silk is the Soul – Testing performing with threads 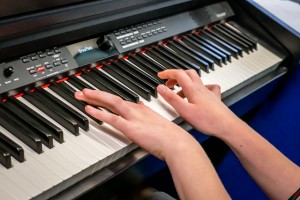